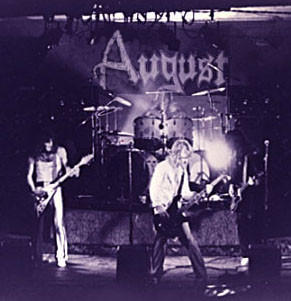 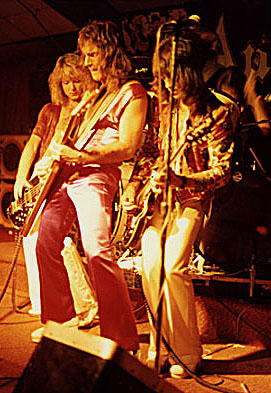 August was a Boston based band which Dave was a member from 1978 to 1980, when he left the East Coast for Southern California.  These photos and story were submitted by Mark Astrella, the former lighting man for August.

August performed a lot of original music, but also did covers of Van Halen, AC/DC, and the like. August was infamous for being LOUD! Dave said he had three full double Marshall stacks behind him. (Six 4x12 speaker cabinets and six (yes six) Marshall heads. (With REO Dave has the equivalent of 1/3 of this power on stage.) Dave said the club management used to complain about the volume, so he'd put an August tee shirt over the bottom speaker cabinet. That explains the August logo on the lower cabinet in the photo lower left. I doubt this had much effect on the db level. Mark Estralla says he has a 20% hearing loss in his right ear, which he attributes to one night at the Mohawk Club in Fitchburg, Mass. Where he had to set up the lighting console in the front of the band, about 25 feet from the stage. He was right in front of Dave's massive Wall O' Marshalls, and suffered through three brutal sets.

August had huge ups and downs. They backed bands like Cheap Trick, Rainbow, Rick Derringer, Spinal Tap, Krokus and Quiet Riot. We used to play often at Mt. C's Rock Palace in Lowell, Mass. - a HUGE room with a great stage. (The purplish stage shot at the top is from Mr. C's.)  Dave always had it together.  He looked good, sounded good, and played awesome!  (Still does!)  Even back then he didn't drink or smoke.  Geez!  The guy didn't even get pimples!

On the down side, I remember one show at the Cosmo Club in Grafton where no publicity resulted in hardly any audience. and the band split the door cover charge. Zaz and I walked away with $3.33 each for a good 14 hour day! We didn't care though, we had a BLAST working for these guys.

In March of 1979, Butch Stone (who had managed Black Oak Arkansas) came into the picture and lined up a deal with Atlantic Records to bring the boys in to record a 4 song demo with Bobby "Foreigner" Warner as producer. Recording session photos are from that two day event. Mark Astrella gives some details: "We were all pretty excited about the trip. Me and my good buddy Ron "Zaz" Pitts (the band's soundman, and all around mechanical genius.) filled a stepvan with band gear and we headed out for New York City from Worcester, Mass. At about 4:30 AM. I was driving when we hit Broadway during the morning rush and the van conked out in the middle lane. Horns were blaring and cabbies were swearing at me and I started to freak! Zaz lifted the motor cover between the seats and assessed the situation. As I'm saying "Zaz! WHATTA WE DO NOW?". He calmly fixes it in minutes with an ink pen and his chewing gum.

We loaded the gear into the studio and the first day they spent laying down rhythm tracks.  That went through the night and into the early morning.  By about 3:30 Bobby Warner, Dave, Jimmy D'angelo and Zaz were looking like their faces were starting to melt off their necks.

After a few hours sleep[, they were back to try to wrap it up.  Butch came by to give a listen.  Carly Simon was in the next studio, and Mick Jagger was wandering around.  The guys finished up the vocal tracks the fifth day.  Back at the hotel before heading home, Butch came by and said he would do his best to get the songs heard by the right people. Those August Demo tapes remain buried with Atlantic Records. They paid for them, so they own them.

Well, apparently those people were deaf or ignorant or both, as they passed on it.  But, that is showbiz.  The band rocked for probably another year before Dave, who had stayed in contact with Butch, decided to move to L.A.

We still talk about those days. Today Zaz is a Tugboat engineer in the Port of Boston. Last I heard, Jamie Pease is still playing music in a group called "RAW".  Jamie was a prolific writer who penned almost half of the tunes for August.  Jimmy D'angelo was the main writer of the band though.  He still writes and play, he was the heart and soul of the band.  Jimmy is one huge undiscovered talent and the sweetest guy you'll ever meet.  We have all lost track of the drummer Louie Santora, he is a great drummer, and I hope he is doing well.  That was so great about working with August.  Jimmy, Jamie, and Dave are 3 really considerate musicians who were always appreciative.

I still run lights, but now in Hawaii, but it is rare that I get to "jam all the lights to full" on a big power chord like I used to with August. I used to tap Zaz on the shoulder and say "watch this" then back up and run at the light board and slam everything up to full bright on cue. There would be Dave, making that same scrunched up face when he slams a power chord.  Ahhhhhh, the good old days!

Many thanks to Mark Astrella for sharing his photos and stories with us.