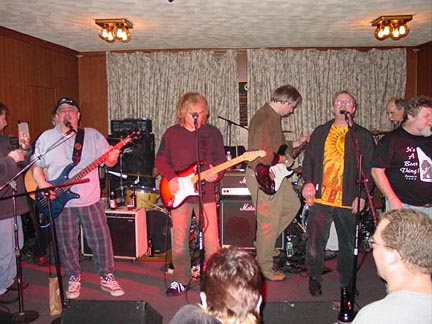 Friend and former "One Way Out" bandmate.

The band "One Way Out" was one of Dave's High School bands. They were together in 1971 and won just about every Battle of the Bands contest in the area. Band members include: Bruce Howe on bass guitar, Steve Bremner on electric guitar, David Capithorne on tambourine, Tim Levitt on acoustic guitar, and Dave Amato on lead guitar.   Louie Santoro and Tommy Berardi were both on drums.   Some of these musicians were from later bands with Dave.

Dave would like to also thank Bob Bruni for the loan of the 100 Watt Marshall amp, which he said really rocked.  He'd also like to thank whoever loaned him the Stratocaster, but sorry to say we don't know the chap's name.  If someone can let me know, I'll be happy to update this.